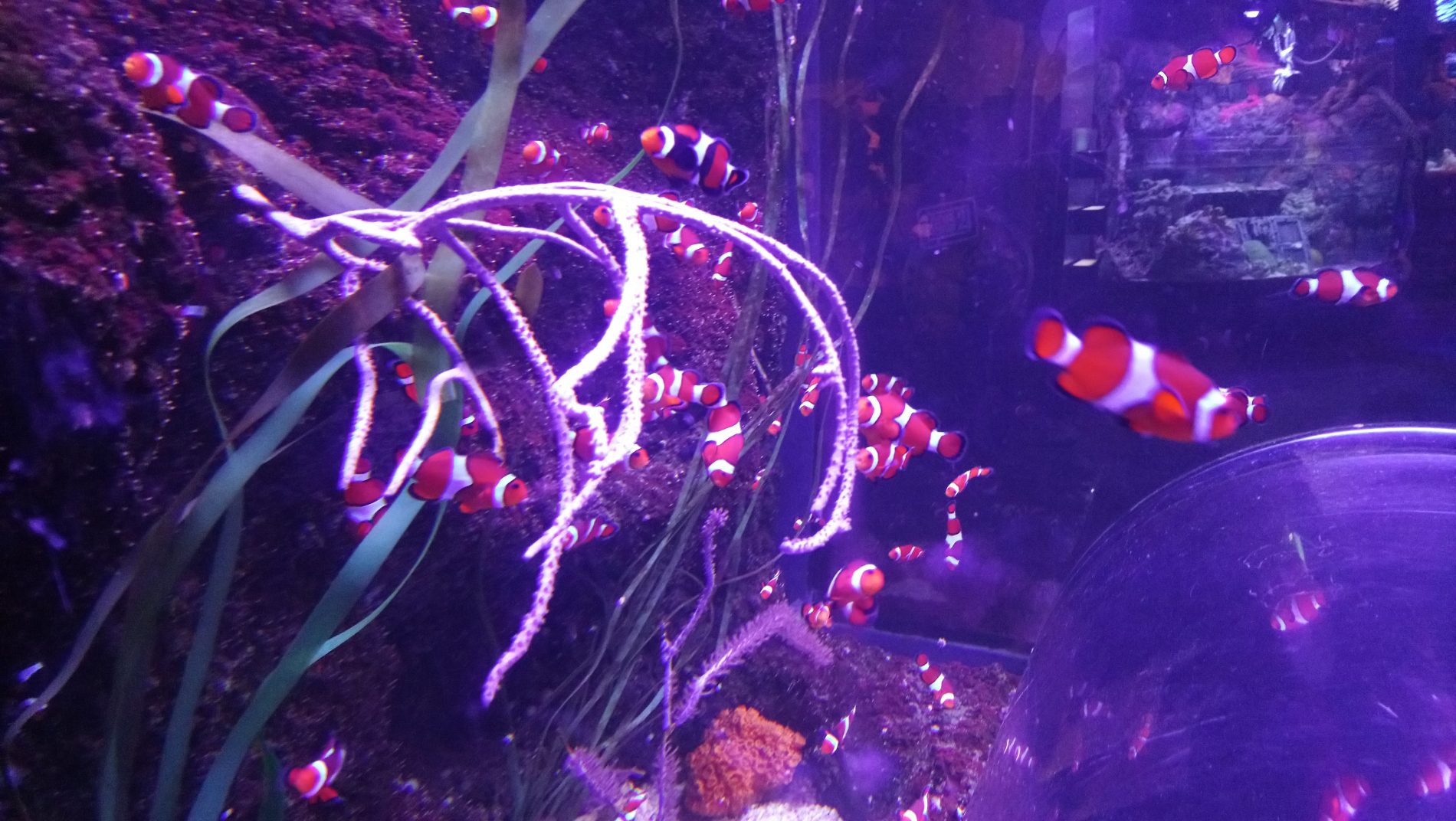 Woolly says – With the festive season upon us I decided that my carer had been ignoring me and my needs in favour of cleaning and painting, not a situation that I felt was acceptable.  Having put my paw down and demanded an outing it appeared that I was to get my wish.

To be fair the thought of spending a day away from dust and the smell of turps and gloss paint was a good idea, not wanting to travel far I decided that a day with fish might be something my small companion would enjoy.

Woolly says – Fish and chips sounded good to me!  Our bus ride into the centre of Birmingham gave me a chance to peek at passing Christmassy displays and wonder if Santa had received my letters, I had been very specific this year on the size, colour and make of car that I needed him to deliver on the big day, having found that he had let me down over the previous ten years!  Jumping down from the bus I shivered as the icy wind caught my ears and tusks and hurried towards the hopefully warmer confines of Birmingham Sea Life Centre.  Opened on 5th July 1996, at which time it was the only inland sea life centre in the UK, it was located in the cities canal basins and became an instant tourist attraction.

Having pushed my way past a line of pushchairs and small children I finally managed to get a space in front of the penguins exhibit, I love penguins with there funny walk and ability to glide through the water with such elegance, sadly it appeared that everyone else in the world also loved them as I was pushed and shoved away from my enjoyment, having kicked several toddlers who had attempted to pick me up my carer swiftly removed me and we set off upwards to look into the tanks.

Each exhibit was bright and colourful with many varieties of the fishy world on show,

even better were the small viewing tunnels that were a perfect size for me to immerse myself in their world. As I lay on my back gazing upwards I wondered if Santa dived into each tank to deliver their presents as he did with everyone’s chimney breast or whether he got out his rod and delivered from his line, sadly everyone is the water was too busy swimming to provide an answer.

Seahorses bobbed around whilst the crabs sat and starred at me and I contemplated the number of crab sticks a partially large specimen might produce. The centre runs one of the biggest sea horse breeding programs in the world and given the numbers seemed to be doing a very good job of it.

A whole section was dedicated to the world of the jelly fish and it was fascinating to watch them cruise around there environment, some with incredibly long legs and others that looked more like see through marshmallows.

Having reached the top of the building we climbed into the lift and headed downwards to the tunnel, this viewing tunnel was big enough for everyone to walk through.  It was incredible, from the giant Turtle that waved at me as we entered to the sting ray that was bigger than Jo.  I wandered through and then retraced my steps to look again, it was fascinating.

A real wow factor as sharks swam above our heads and brightly coloured fish seemed to be right next to us, taking photographs of moving fish proved somewhat tricky as they scooted past.

Woolly says – All to soon we had reached the end and found ourselves outside on the canal system that runs through parts of Birmingham.

The Birmingham Canal was completed in 1773 and became known as Gas Street Basin providing a physical barrier to prevent the Worcester and Birmingham Canal from benefiting from their water, this was changed in the early 1800’s which allowed the network to transport goods from Worcester and surrounding areas into the city providing it with coal, iron ore and sand for the industry.

As a small child I remember it being full of rubbish and nearly unusable. In 1973, the basin featured prominently in the Cliff Richard film Take Me High where they managed to hide a lot of the debris and mess for the filming.

Woolly says – During the 1990s much of the area around the basin was redeveloped and the older buildings refurbished, now it is a thriving area for bars, restaurants and evening entertainment.

With the wind biting my ears and my tummy groaning at its lack of sustenance we dived into the nearest eatery and indulged in lunch, plenty of fish on the menu but I seemed to have lost my appetite for that particular dish having seen them swimming round so happily.  With our bellies full we braced ourselves for the outside conditions and headed towards the city centre. Centenary Square was a mix of roadworks for the new tram system, old buildings, a Ferris wheel and a skating rink, knowing that Jo likes ice skating and that I struggle to keep my balance I hurried past before she could get any silly ideas.  I found myself standing in front of a strangely shaped building.

We stood looking at the octagonal design as I realised that I had passed it thousands of times in my life but had never known what it actually was.

Woolly says – I took a tentative paw step inside and considered the information board.  The Hall of Memory was designed by S. N. Cooke and W. N. Twist and was erected between1922–25, by John Barnsley and Son, to commemorate the 12,320 Birmingham citizens who died in World War I. Inside was small with a rather lovely ceiling and a marble plinth with a wooden coffin on it.  The recent poppy wreaths made a lovely splash of colour as we stood paying our respects.  Outside there were four statues by local artist Albert Toft, representing the Army, the Navy, the Air Force and Women’s Services, with our snaps taken we hurried onwards towards the Christmassy delights of the German Market.

The Frankfurt Christmas Market and Craft Market is an annual outdoor Christmas market and craft fair held in central Birmingham, started in 2001 with 24 stalls it has expanded every year since. It is supposed to be the largest such market outside Germany and Austria, but to me it seemed a lot small than the one we had visited in Edinburgh a couple of years ago.

It was also identical to the Edinburgh market in the wears that the stalls were selling, it did however have hot chocolate and mulled wine! The views above eyelevel proved interesting with the grand glorious Town Hall, the modern high rises and the wooden cabins that had taken root temporarily.

Woolly says – As I sat warming my paws on the hot mug and attempting not to get cream up my trunk, I wondered what this Christmas and new year would bring, other than my racing car of course, Where would we be this time next year? Would anyone have taken pity on me for having to live with my cruel carer and whisked me away to a life of leisure? Would our plans for a new life finally have happened? Only time will tell.

Have a Mammoth Happy Christmas and an even bigger New year.

Whoo Whoo it's been a bit of a day, find out in th

RIP Bob the street cat, a legend in his lifetime a

Apparently bubbles are a thing in England... I've

Heading out for my daily walk... And the rain star

Rather excited today 😁 my latest book... A Mamm

Got to love bluebells, they even smell good 😁 #

Ready for tea after a morning of baking and rember

Home made brittle and a good film can't say better

No I'm not sharing 😐 #traveltalesofawoollymammo

My human has got very excited about this buy.... H

Getting lost in the primroses 😎 #traveltalesofa